I love unexpected finds. As I am someone who tends to make bad decisions when forced to think on the spot, it is rare that I venture out to somewhere new completely unaware of anything about it to avoid disaster. We were initially headed for the much raved about Gemmayze St but did not take into account that there was a separate lunch menu. Cue the countless apologies to the staff (having already been seated and served water, oh God) as we awkwardly returned the menu and slunk over as inconspicuously as possible across the shared dining space to the cafe opposite theirs. A quick browse of the menu on the window ticked it off with a green light for something we were felt like eating today.

Gosh, why are we girls so picky?

L indulged her sweet tooth as 2:00 PM seemed sufficiently late enough in the day to have ice cream for breakfast/ brunch. 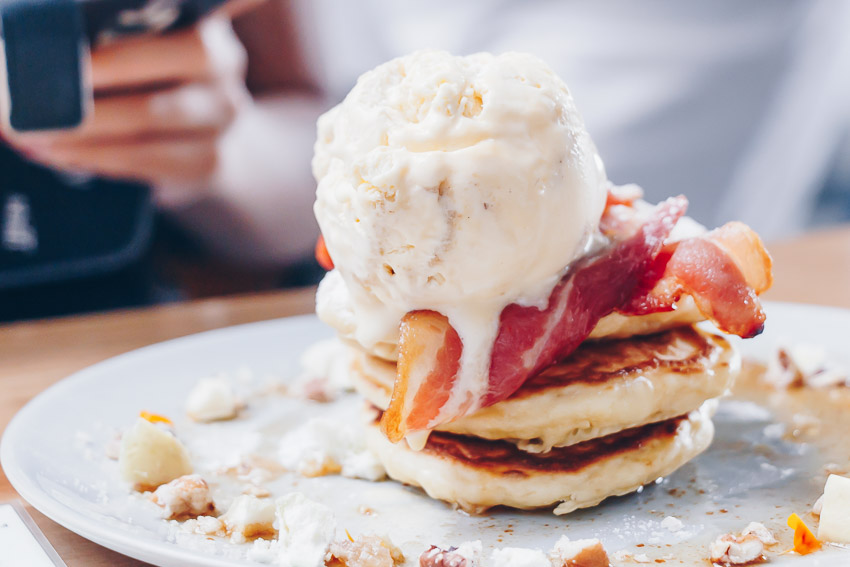 The toffee apple ice cream was amazing. Slight hints of cinnamon, and the wonderful taste of buttery braised apple tossed and churned straight into this smooth and creamy creation. The flavour was the epitome of a homemade apple pie and unlike any you’d find in a supermarket. While it was very sweet on its own, it balanced out well with the hotcakes and savoury bacon.

I was intrigued by The Midnight Baker’s Freedom Loaf- signature gluten, wheat, dairy, nut, yeast, egg and refined-sugar free for all the health fanatics out there. The bread was dense as one would normally expect in this category, and loaded with sunflower seeds for that texture. I actually enjoyed the bread, it was far from fluffy but it sure was much more filling and satisfying to devour. The toppings were clearly well thought out with every effort going into the cohesiveness of elements rather than looks as many others usually do (though it does look pretty anyway).

Being an avid planner and a pessimist together is not a good combination. The instant my planned schedule starts going awry, I immediately start resigning myself for the worst day ever. The upside of this though, is that when things actually turn out okay, I become a grateful, relieved, and thankful bumbling ball of happiness. Bestie was the most wonderful, unexpected adventure and I pleased to discover afterward that it made its place in Metro’s Top 50 Cafes. Well deserved!

FYI it is located inside St Kevins Arcade which is like a little world of its own. The recent renovations of the building include huge floor to ceiling windows, making it a prime location for sipping on a cup of coffee while looking out over the city. along with the small, locally owned hipster stores, it becomes very photogenic and unique. I’ll be back for sure to successfully try Gemmayze St’s dinner menu next time.

One thought on “Bestie Cafe”